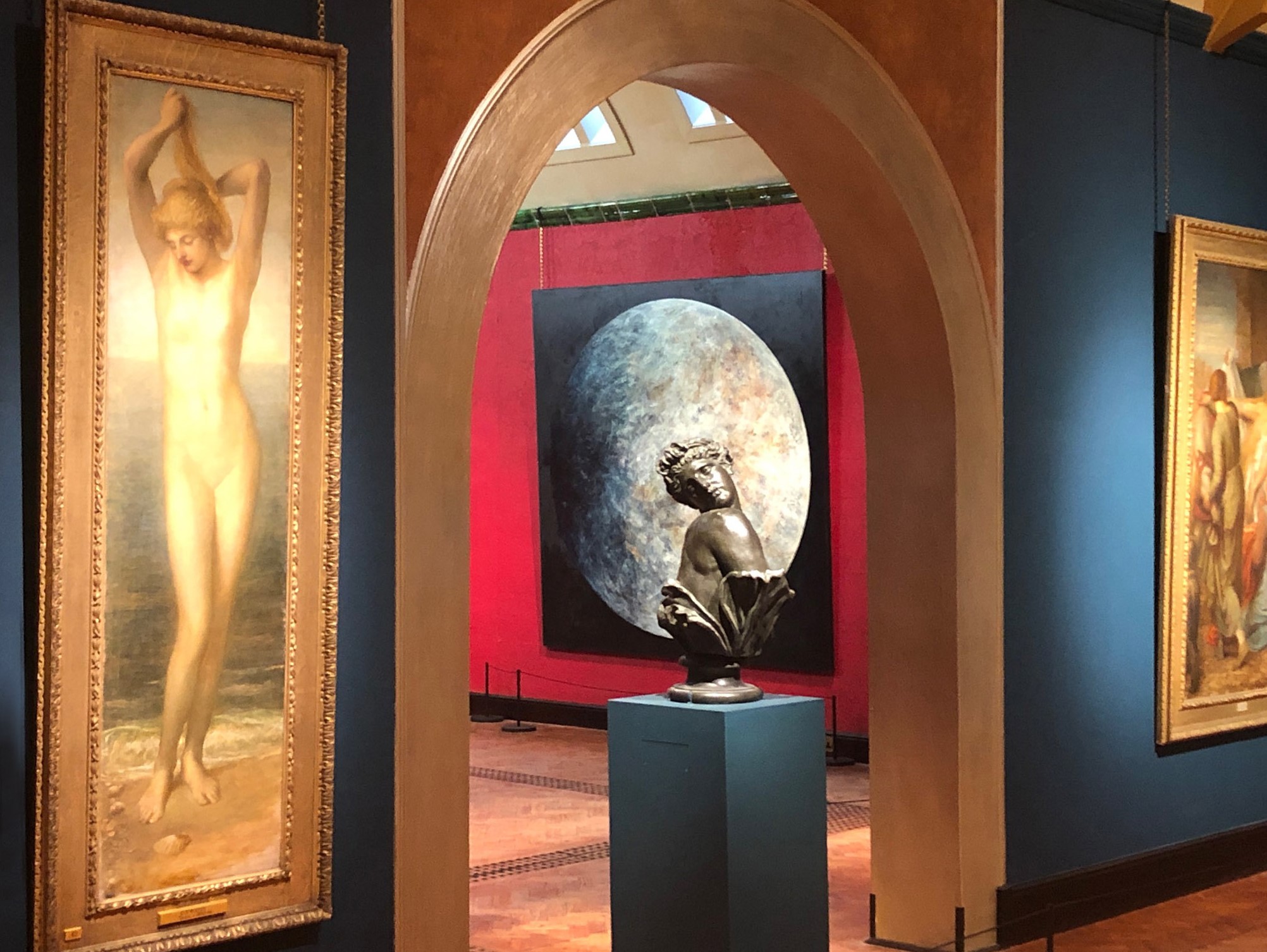 Three months before the 50th anniversary of the first moon landing, the first exhibition to explore nineteenth-century visions of the moon opened at Watts Gallery. By the time that ‘Moonscapes’ closed, it had met with critical acclaim and struck a chord with the public as the world approached the anniversary of the landing of the Apollo 11 Lunar Module Eagle.

‘Moonscapes’ considered the Victorian fascination with the earth’s closest cosmic neighbour, bringing into focus the ways in which nineteenth-century artists have drawn inspiration from the moon. The exhibition presented a selection of works by artists including John Atkinson Grimshaw, Evelyn de Morgan, William Holman Hunt and G F Watts, accompanied by a programme of contemporary art interventions that accented key themes of the exhibition.

Prior to entering the exhibition, visitors were met by two contemporary works of art selected to introduce and contextualise ‘Moonscapes’. Both works are monumental in stature and impact. On the gallery lawn in the rural setting of the Surrey Hills in which the Watts Gallery sits, was placed Cosmoscope, a colossal sound and light sculpture created by Professor Simeon Nelson with Rob Godman and Nick Rothwell. On entering the Gallery, surrounded by the permanent collection of works by G F Watts OM RA, widely considered in his day to have been the greatest painter of the Victorian age, pride of place was given to Artemis, a 250cm x 250cm oil on canvas made in 2009 by Charlie Barton.  This vast, shimmering, mesmeric vision of the moon was offset by the deep red original 1904 wall coverings of the Watts Gallery and adjacent works including – aptly – G F Watts’ 1855 fresco of a statuesque Apollo and Diana.  Barton’s highly textured contemporary piece proved both an ideal contrast to the fine detailing of earlier figurative works by Watts and at the same time a subtle complement to the impasto of many of Watts’ later symbolist works.  A fitting introduction to the key themes of the exhibition, Artemis was accompanied by additional contemporary works such as Year 2 Arsenic 1 by Garry Fabian Miller.

Whilst the appearance of the moon, and its changing phases, has been the subject of visual interpretation since time immemorial it was the development of astronomical telescopes in the seventeenth century that enabled closer scrutiny of the moon. Artists and scientists alike were beguiled by the complexities of the cosmos. Captivated by the challenge of depicting nocturnal landscapes, many artists saw the moon as a symbol of the immense compass of nature.

By contrast, some Pre-Raphaelite artists such as William Holman Hunt sought to represent the eerie lunar atmosphere by portraying solitary figures in contemplation of the moon. Holman Hunt’s luminous 1869 watercolour The Pathless Waters (Homeward Bound), shown in the exhibition, captures this mood of nocturnal melancholy, whilst symbolist painters, including Evelyn de Morgan and G F Watts, chose to depict the personification of the moon or the creation of the heavens. In De Morgan’s Luna of 1885 the moon is embodied by the figure of a young woman seated on a crescent.  Watts’s dynamic vision for the creation of the cosmos is illustrated by the Sower of the Systems of 1902, in which a robed, faceless figure sweeps across space, radiating arcs of gold to form galaxies.

Barton’s Artemis, like many of her lunar works combines both the simple structural mechanism of a circle within a square with the complex layering of oil, pigment and resin which creates the texture of her lunar surfaces. This iterative process creates an impression that is both desolate and pulsing with the energy and power of life. It is in this artistic tension that the allure of Artemis lies.

One of the privileges of my role as Director of Watts Gallery is to witness the reaction of visitors to the works that are presented in the galleries. The reaction to Barton’s Artemis appeared to me to be both universal and immediate. The power of Artemis lies in its ability to arrest the viewer with the detailed enormity of its representation of the moon, transporting the observer into proximity with an object that is both familiar and distant.  The genius of Barton’s art is her ability to draw the viewer into the impasto glow of her visions of the lunar surface. Barton’s depictions of the moon work precisely because they represent, I suspect, how we imagine the moon in our dreams, and at the same time, are intentionally not scientific renderings of the moon’s surface.

In the context of our exhibition Artemis provided a contrast between both the distant allure of the moon as seen in the works of Abraham Pether and his two sons from the late eighteenth- to mid-nineteenth century and the later personification of the moon by artists such as Evelyn De Morgan. In doing so, I would contend that Artemis, created in a world after the moon landings, is heir to the traditions of those nineteenth-century artists who sought to represent in art a moon that seventeenth-century science had illuminated.